Before we get started let me say that any links you click on in this post are affiliate links. If you purchase through these links I may get a commission from your purchase. It will not change your purchase price at all.

Let’s take a look at the Ascend Fishing Kayaks primarily sold at Bass Pro Shops and Cabelas. In this article we are going to focus on the 12′ kayaks. I discussed the 10′ FS10 model in a previous post.

Why Ascend you ask? Well, cause that is what I have. LOL

Also, the reason I am discussing the Ascends when there are so many other options out there, is due to the fact that they are not incredibly expensive and you can find them easily at any Bass Pro Shop or Cabelas. They are also an American made product, which I do like to promote.

While, you will find mixed reviews on these products all over the internet, this is my opinion on what I found. I used several resources such as, YouTube, Bass Pro’s website, I went personally to the store and checked them out and like I said. I own an Ascend product myself.

The 128T is the tank of the fishing kayak world. Many referred to it as their barge. It is 12′-8″ in length with a weight capacity of 350lbs. It weighs in at 96lbs. I will say that is quite heavy and large. For someone like me that usually goes kayaking alone, this kayak would be hard to manage without help. I do like the look of it and after watching many videos it seems many that own this boat really like it.
<

This boat also offers several storage options throughout the kayak. It includes no less than 4 flush-mounted pole holders and it has a removable rod-tip protector for those clumsy folks like me. The 128T also comes with bungees and scupper plugs for the 8 scupper drains. It has carrying handles on the bow and stern. I will say that many have added handles on the sides to help with transport.

Overall, this kayak was well liked, very customizable for your personal needs and is a stable boat for the price point.

This kayak did not rate as well as the 128T. It is 8″ shorter and has a weight capacity of 350lbs and is only about 77lbs. That in my opinion is not enough, based on the reviews to convince me to spend the money on this kayak. With that said, let us look at the basics of this kayak. 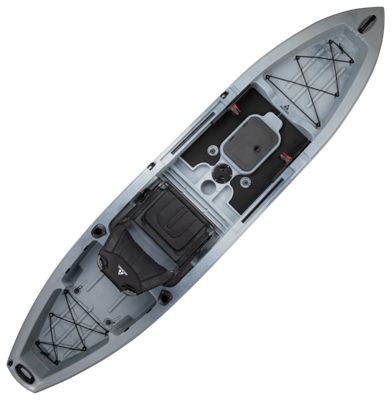 <Click here for current pricing>
Some Basic selling points as mentioned on the Bass Pro website are as follows.

Again, this kayak offers flush-mounted pole holders and paddle storage. It has 6 scupper drains and plugs just like the 128T.

I will say though, that this kayak is priced just under what you pay for the 128T and the value is less as well. After doing the research, there were some that said that the material of this kayak was thin and they wore holes in them by dragging them to the water and back to their vehicles.

There were several that complained about asymmetrical hulls, which affected the tracking and that they were hard to stand on.

Now, with all the complaints I found, there were a few that really liked the kayak. Any of the complaints could have been from misuse or poor care of the kayak and/or just a poor batch from the manufacturer. If it were me, I would personally spend the extra dollars and upgrade to the 128T.

So, this kayak had the best reviews of all three of the kayaks to date. This kayak is a hybrid version. It gives you the best of both the kayak and the canoe. This kayak is 12′ long, has a weight capacity of 450lbs and weighs in at 76lbs. Again, not a light-weight kayak, but given its purpose not terrible.

<Click here for current pricing>
Some basic selling points as mentioned on Bass Pros website are as follows.

Again, with kayak the reviews were good. They really liked the space, stability and versatility of this kayak.

They also sell a compatible duck hunting blind accessory that will work on this kayak.

The biggest complaint I found was that it is a slow kayak and that if you are trying to go backwards and a wave comes up behind you it could take on water pretty quickly.

Not sure this boat is meant to run any races anyways and by golly, watch what you are doing and I think you would be fine. I personally think it would be a fun kayak if you were into photography, hunting, fishing or just meandering around the lake.

There You Have It!

That is my opinion on the Ascend Fishing Kayaks.

I hope this helps if you are looking at these models of kayaks. I do not think they are bad for the person looking to get into the sport of kayaking fishing and looking to just have some fun with it.

I know that mine is a fun kayak to just get out on the water in. It has its faults and could be improved, but I also feel that for the price point these are great boats.

If you have any opinions of your own or any comments please leave them below. I would love to hear them.